TOLO News interviewed Ms Robaba, a talented artist who is differently-abled girl. Ms Robaba has created wonders with her paintings by sketching them with her mouth, and has now started performing concerts for her fans to “raise a new hope for Afghanistan”.

Robaba, who has attended few international events, including Turkeys’ Mersin International Accessible Art Festival in October 2018, joined a singing class and a music group in May.

Her fellows in the music group said they have joined the team almost a year ago.

Her first performance was in front of a number of audience at her own Arts and Culture Center in Kabul on July 19. 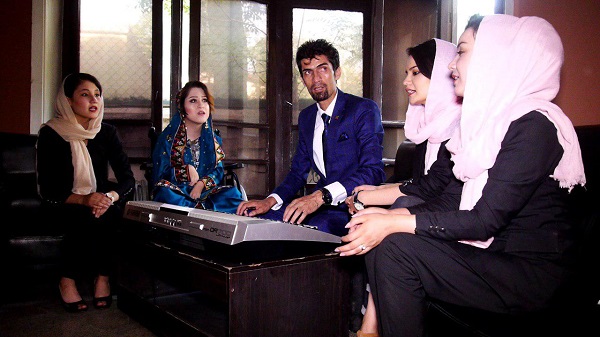 Robaba, who was born in the central province of Ghazni with partial paralysis of her limbs, said she wants to be the voice of the Afghan people, women in particular, who are stills suffering from violence.

“I was encouraged by my friends. I want to experience new challenges except painting,” Robaba said. “I want to follow whatever I like. Despite painting, I want to be the voice of the Afghan people. My songs are mostly about Afghan women as I want to be their voice.”

Members of the group, titled “the Voice of Afghan People”, said they support peace in the country through music.
“I joined the group a year ago. Supporting peace is our main goal,” a member of the group, Huma Mohammadi, said.

“We want to be a platform for the women who want to raise their voices,” said Sadaf Hamidi, a member of the group.
Robaba’s first song, composed by head of their group, is about prosperity and peace in Afghanistan which is the dream of every Afghan.