US Central Command Chief General Kenneth McKenzie has said and assured that the US Army will continue to collaborate with Afghan armed forces.

The Office of Afghan Chief Executive in a statement said that General McKenzie made the remark while visiting CE Abdullah Abdullah. 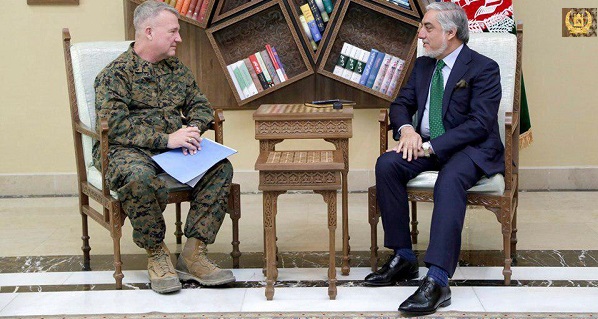 In the meeting, Dr. Abdullah considered General McKenzie’s visit to Afghanistan as a sign of friendship and joint military cooperation between the two countries to fight against enemies and common threats, and praised the United States for its assistance and sacrifices in Afghanistan in the fight against terrorism and the revival of Afghanistan.

Taliban not only failed to expand control of territories and seize of provincial capitals, but suffered massive casualty toll, CE Abdullah told in the meeting with US central command chief in Kabul.

Chief Executive of the Government urged international allies of Afghanistan to pay more attention to the safe havens of insurgents in Afghan war.

While praising the sacrifices of Afghan armed forces in combat against common enemy of Afghanistan and America, General McKenzie expressed satisfaction for the progress and capacity building of the Afghan Armed Forces.

He also reassured the continuation of United States army’s support with Afghan forces.

In the meeting both sides discussed about peace talks, holding presidential election and regional issues.