The presidents of Afghanistan, Turkmenistan and Azerbaijan held a virtual tripartite meeting on Thursday to discuss trade cooperation.

The committee, proposed by the Azerbaijani leader, will include ministers of transport and other officials from the three countries.

Ghani thanked the two leaders for their cooperation in support of the Lapis Lazuli Corridor that opened in 2018 to link Afghanistan to Turkey. 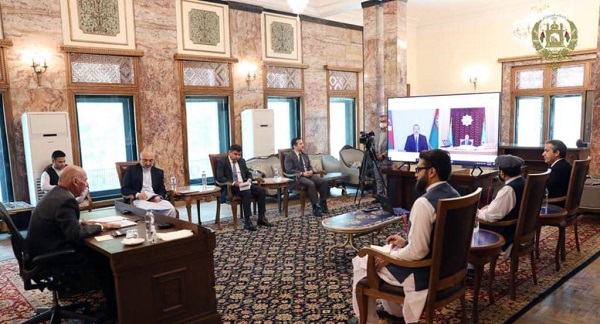 He also thanked the Turkmen leader for extending the railway line to Turgundi city in Herat province.

Welcoming the idea of a joint delegation, Ghani announced that they are ready to work in the public and private sectors in the areas of trade and investment. International partners are also ready to cooperate in the expansion of railways in Afghanistan for economic development.

He further added that the U.S. is committed to supporting development of dry ports in eight locations.

Berdymukhamedov proposed for the possibility of simplifying customs operations by introducing a control system based on the Single Window principle. He also added that Afghan iron ore mines are ripe for investments.

The plans for a Fibre Optic Corridor were also lauded for bringing a “positive change” in not only Central and South Asia, but even China.

Towards the end, Ghani reassured the leaders that the Afghan government is committed to the peace talks.