The press office of the Ghazni ANA brigade has announced the launch of a massive clearing operation in Jaghori distirct.

According to the statement, the operation in the district was led by the Army Chief of staff in order to eliminate the enemies of Afghanistan.

In this operation, the ANSDF successfully and rapidly advanced and took over the areas under control in the district of Jaghori. 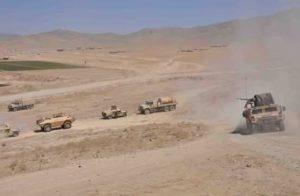 For the past 2 weeks, Jaghori and Malistan districts of Ghazni, and Uruzgan Khas in Uruzgan have been under constant attack by the Taliban insurgents, leading to the residents of the districts having to flee and leave their homes.
buy apcalis oral jelly online www.ecladent.co.uk/wp-content/themes/twentyseventeen/inc/en/apcalis-oral-jelly.html no prescription

Many even put up a brave resistance by forming “people’s forces”. After almost a week of requests by local residents, and a protest by people in Kabul, the officials and leaders have finally tended to the conflict.