The Presidential Palace in a press release announced the minutes of the meeting between President Ghani and Jamiat-e-Islami.

The statement read that “President Mohammad Ashraf Ghani stressed on proceeding with peace process based on national consensus in a meeting with Jamiat-e-Islami solidarity council representatives today.” 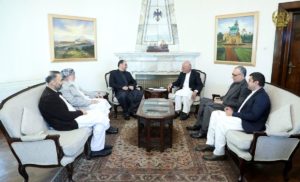 The President, as per the statement, took advice from the participants of the meeting regarding the formation of an advisory board that will advise the government on the composition of the negotiating team and a framework for their conduct.

The participants of the meeting welcomed President Ghani’s move to create an advisory board for an inclusive and nationally consensual peace process, the statement clarifies.

“The President recently started meeting with various demographics of the country, and will continue the meetings for several days to come,” the statement finally added.

President Ghani also met with Abdulrab Rasul Sayyaf a Jihadi leader, and the Speaker of Senate Fazal Hadi Muslimyar, with whom he insisted that national consensus is imperative for any peace negotiations.

In another separate meeting the president also met with Mohammad Yunus Qanuni former speaker of Lower House of Parliament who also gave suggestions regarding the peace process and the suggested advisory board.