The Chief Executive Office in a statement said, Abdullah held a meeting with the Prime Minister of Kazakhstan Askar Mamin.

At the meeting, the sides focused on the economic and investment cooperation between Kazakhstan and Afghanistan, participation of Kazakhstani business in the development of energy, construction, agriculture, mining, transport as well as oil and gas industry. 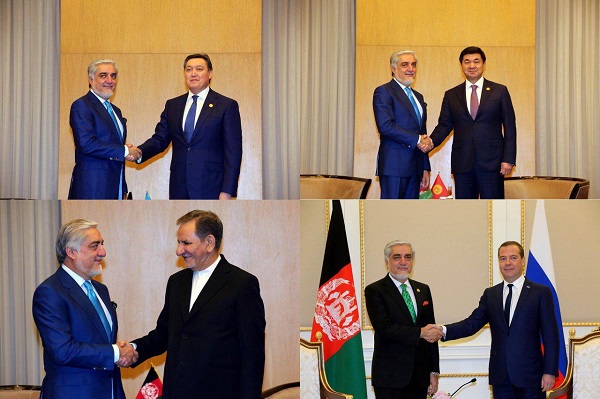 According to the statement, the sides agreed to develop dialogue on the most topical issues of bilateral and regional cooperation.

As part of his visit to Tashkent, the Chief Executive met with Prime Minister of Kyrgyzstan Muhamedkaliy Abilgaziyev and discussed prospect of bilateral cooperation.

“Afghanistan calls for develop of relations at various levels with Kyrgyzstan. Peace talks are Afghanistan’s top priority and we strongly believe that by establishing peace, economic relations will develop between all countries in the region, especially South and Central Asia,” CE said at the meeting.

The statement further added that the Chief Executive also met with the Russian Prime Minister, Dmitry Medvedev and first Vice-President of Iran, Eshaq Jahangiri and talked about the peace in the regional countries.