The Chief Executive Abdullah Abdullah on Saturday addressed the 18th meeting of the Shanghai Cooperation Organization’s 2019 Council of Heads of Governments in Tashkent.

Abdullah emphasized that the regional stability depends on Afghanistan’s peace and they need to work together and constructively to resolve the region’s shared challenges to find a solution for ending the war.

“We are making efforts for strengthening national consensus on peace and we hope that all regional and international stakeholders who support the peace (process) will work together in this respect,” Abdullah said.

“We believe that through regional cooperation and thoughtful integration, not only will we identify and seize new opportunities for development and growth across our vast and rich region, but we can also overcome the structural impediments and deal with common challenges,” he added. 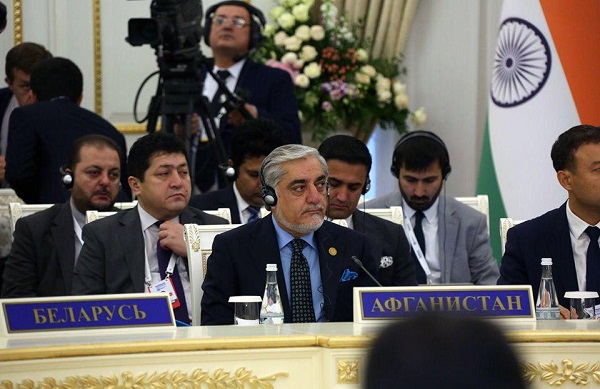 Abdullah declared that Afghanistan is on the frontline of fight against international terrorism and Afghan forces are fighting terror groups which are shared threat to the world especially the region.

“Afghanistan was fighting war against terrorism with the support of regional countries and other international friends with huge human and financial sacrifices,” he stated.

The Chief Executive noted that Afghan participation in the presidential election despite threats by Daesh and the Taliban was “a step forward towards achieving peace in Afghanistan.”

He mentioned that successful regional cooperation experiences are critical for advancing social and economic development objectives and for generating wealth, assuring stability and long-term peace.

“It is in this context that we consider the SCO as a unique regional platform for converging ideas, policies and projects on regional issues including trade, infrastructure development, counter-narcotics and counter-terrorism,” he added.

At least 11 people, including two security personnel, were injured when a blast rocked the capital…