Qatar has renewed its support for all international efforts to support peace, security, stability and prosperity in Afghanistan, expressing its belief in the peaceful and political settlement of crises, the priority it attaches to mediation and its commitment to achieving lasting peace in Afghanistan.

This came in a statement delivered by the Permanent Representative of Qatar to the UN Ambassador Sheikha Alya Ahmed bin Saif al-Thani at the UN General Assembly on the situation in Afghanistan.

Sheikha Alya said that Qatar is continuing its good offices and mediation efforts among the Afghan parties, in order to stop the violence, converge views, achieve reconciliation and lay the foundations for a political settlement.

This will ensure peace, stability and prosperity for the Afghan people, and will positively reflect on the strengthening of regional and international peace and security, she added. 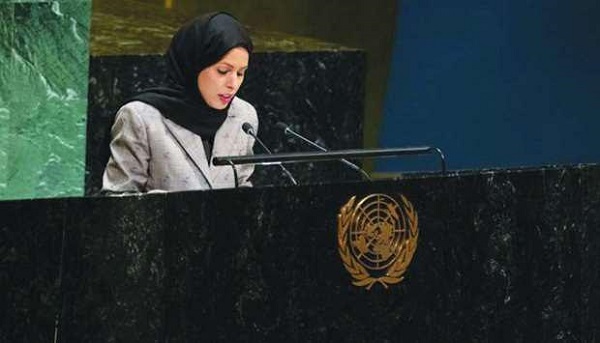 As part of Qatar’s mediation efforts, Doha recently hosted the Afghan Peace Conference from July 7-8 , 2019, under the auspices of Qatar and Germany.

She said that the conference brought together many figures representing the society of Afghanistan, and dealt with a wide range of issues including the rights of women and minorities, the cease-fire, the release of prisoners, the withdrawal of foreign forces and the political future.

Qatar welcomed the report of the Secretary-General and his highlight of the importance of peace talks between the Afghan parties and the talks between the United States and the Taliban that have been mediated by Qatari efforts, Sheikha Alya said, stressing the importance of the role of the international community in supporting the Afghan people to complete the transitional phase and overcome the challenges that still face them, including the challenges facing sustainable development and the Afghan economy.