President Ashraf Ghani spokes about the Afghan peace negotiations during a meeting at the Presidential Palace on Saturday.

Chairing a meeting of the security forces, Ghani said the Afghan government’s position on the peace process has always been clear.

“We are moving forward with a strong position, strategy, program and determination to achieve lasting and dignified peace,” he said.

Ghani called the start of the in-person negotiations with the Taliban a result of the sacrifices made by the security and defence forces.

He assured the people that the government would continue the process to end the war with prudence and determination. 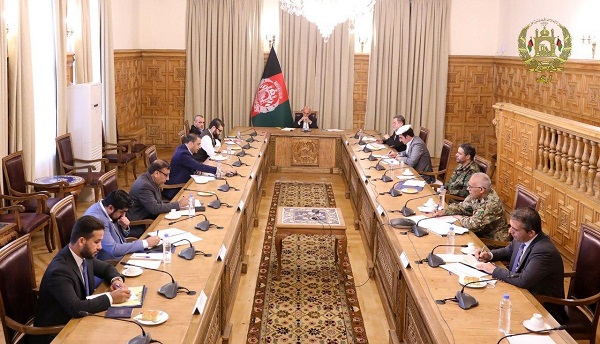 At the end of his speech, President Ghani said that the government’s position on peace is clear and the Afghan delegation represents a “united Afghanistan and the government of Afghanistan.”

National Security Adviser Hamdullah Mohib also said the country supported a “dignified and lasting peace that protects our gain, preserves the rights of all citizens and fosters pluralism.”

“The Islamic Republic of Afghanistan has always been and will be Islamic and people-centric. Our Islamic republic is an umbrella for the diversity of voices and opinions,” he said, adding, “As a group, the Taliban too can benefit from democracy, as others do, under this umbrella.”

He acknowledged that the system needed some reforms and they were looking forward to working with the Taliban to “further strengthen our republic, meet the expectation of the Afghan people and advance our national interests.”