Reacting to recent the remarks by Hezb-e-Islami leader Gulbuddin Hekmatyar, the President’s deputy spokesman Dawakhan Minapal, said that only the defense and security forces had the right to use force.

Minapal stated that no individual or group other than the defense and security forces had the right to use force.

“The current system is based on the will of the nation,” he said. “It has national and international legitimacy. The people fully support their system. Because of the bitter experience of the past, the people have stood in support of this system and will not allow anyone to rule them by force and enter the Presidential Palace. The security and defense forces are the defenders of the republic.” 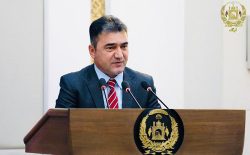 Earlier, Hezb-e-Islami leader Gulbuddin Hekmatyar warned that if the Afghan government does not release his party’s prisoners, a large rally would be held to end President Ashraf Ghani’s governance.

Speaking at a ceremony marking the 32nd anniversary of the withdrawal of Soviet troops from Afghanistan, Mr Hekmatyar said that more than 30,000 Hezb-e-Islami prisoners were being held in Afghanistan prisons and another 100 were arrested after an agreement was signed between his party and the government.

President Ghani: Withdrawal of Soviet Troops from Afghanistan Was ‘Irresponsible’