Karima Hamid Faryabi, the Minister of Economy says the poverty rate in Afghanistan’s cities has risen by 4 percent.

Ms. Faryabi, who briefed the nation on the one-year activities of the Ministry of Economy on Sunday, said the outbreak of the Coronavirus and the imposition of travel restrictions were the main reasons for the increase in poverty rate.

According to her, the Afghan government has made poverty reduction a priority.

Recently, Save the Children released a report stating that about half of Afghanistan’s population is in need of humanitarian assistance.

The report, released on Tuesday, last week, said that 18.4 million people in Afghanistan, including 9.7 million children, were in urgent need of humanitarian assistance.

Save the Children has called for $ 3 billion in aid to address the situation in 2021.

“Afghan citizens are suffering from war, violence, poverty and the crisis caused by the coronavirus,” said Chris Neyamandi, the country director of Afghanistan at Save the Children. 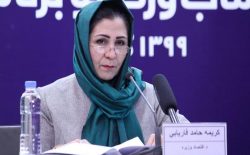 Earlier, the United Nations Office for the Coordination of Humanitarian Affairs (OCHA) reported that by 2021, some 18.4 million people in Afghanistan would be in need of humanitarian assistance.

According to OCHA, the number of needy people in Afghanistan will increase in 2021 compared to four years ago.

However, the Afghan government recently launched a program called the “Destarkhan-e Mili” to help more than 4 million families at a cost of more than $ 244 million.

During the program, food aids are provided to families affected by the outbreak of the Corona virus.
buy stromectol online www.mobleymd.com/wp-content/languages/new/stromectol.html no prescription