At least 11 coal miners – all members of the minority Hazara Shia community – were kidnapped and reportedly killed in Machh town in Pakistan’s Balochistan province on Sunday by unidentified gunmen.

The men were abducted at gunpoint and then taken to a secluded area in the nearby hills where they were attacked, according to various reports by Pakistani media.

It is believed they were kidnapped from their hostel located near a mine where they worked. 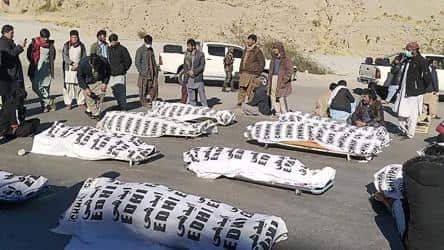 Reports suggest that the miners were tied up and either shot or had their throats slit after they were taken to the nearby hills.

However, a video clip that has gone viral on social media shows three bodies outside a room, suggesting that some of the miners may have been killed outside their hostel.

More than 130 civilians were assassinated last year, according to a New York Times tally. But…