The Islamic Republic of Afghanistan Peace Negotiations Team says no discussions have been held with the Taliban negotiating side on the establishment of an interim government in Afghanistan.

Members of the Afghan negotiating team in a press conference on Sunday said that the Taliban team has not been able to hold an official meeting with the republic side for some time and the peace talks have been stalled up to now.

“Peace talks have been interrupted due to the Taliban’s lack of seriousness,” Rasul Talib, a member of the Afghan government’s negotiating team said. “In Doha, we look forward to seizing the opportunity to resolve the war crisis peacefully; Not to wait for the other side to take a stand in another countries.”

In respons to the Taliban’s lack of seriousness against the republic team, Mr. Talib said, “This is opposite. The Taliban have taken us so serious that they cannot come and defend the issues they raise at the negotiating table. We are ready for dialogue with a strong will, and we proved this in the first round of talks.” 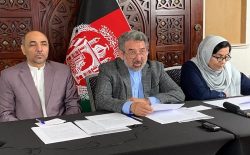 He stated that in the first round, the two sides agreed on the basis of the talks, and expressed hope that the negotiating delegations would start the talks as soon as possible to agree on the next issues.

Responding to recent remarks by the deputy head of the Taliban delegation in Moscow, Mr Talib said that there was no discussion of an interim government on the agenda in Doha.

Recently, Abbas Stanekzai, the deputy head of the Taliban delegation leading a delegation headed to Russia, and said there that the current government led by Mohammad Ashraf Ghani is the main obstacle to peace in Afghanistan.

According to Stanikzai, if President Ghani resigns from power, peace will be established in Afghanistan.

However, Mr. Talib says that the issue of Afghanistan can only be resolved through dialogue, and if the Taliban have anything to say, they should formally raise it at the negotiating table.