Local officials reported that 40 Taliban insurgents including a Pakistani citizen were killed and wounded over the past 24 hours in Ghazni province. 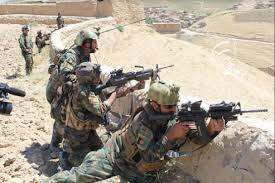 As a result of Afghan forces and Resolute Support Mission during the past 24 hours in the center and districts of Andar and Nawa of Ghazni province, 23 Taliban insurgents were killed and 17 wounded and another insurgent was arrested, media office of Ghazni province said on Saturday.

Ghazni press office added that during the operation a large number of weapons and ammunition were seized by security forces in these operations.

Ghazni press office emphasized that, in past two days, NDS personnel of Ghazni province arrested 4 individuals in connection with terrorist activities from surrounding of the province.