Former President, Hamid Karzai has stressed the role of cooperation by the regional powers particularly Russia and China for the stability in the region.

“We all including Afghanistan, Central Asian states, and particularly the region’s great powers Russia and China to fully and closely cooperate to control situation in the region and bring economic security and stability,” ex-president said during his address at the Astana Club held this week in Kazakhstan’s capital. 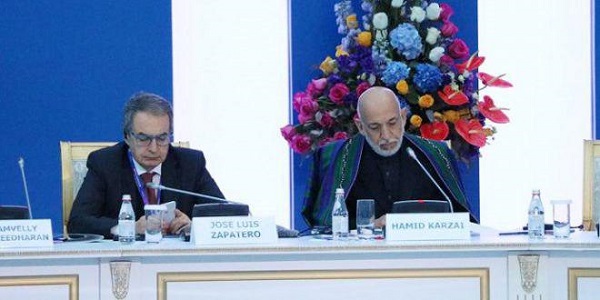 He declared that the US efforts to eliminate terrorism did not work in the past 18 years despite countless sacrifices and sufferings from the people of Afghanistan, but hoped that Washington also honestly help Kabul and other regional states in fight against IS-K terrorist group.

The former president also called for regional acts against terrorism in the framework of the Shanghai Cooperation Organization if the foreign troops deployed in Afghanistan failed to resolve the problems.
buy flexeril online https://www.evercareop.com/wp-content/themes/twentytwentyone/inc/new/flexeril.html no prescription

Pomegranate farmers in Kandahar province say they are feeling the squeeze this year, with business blemished…