A leader of Jamiat-e-Islami party Mohammad Ismail Khan, said on Saturday that the representatives of the party have requested the president to not dissolve the High Peace Council.

Additionally, they want the President to not persist with a peace negotiations team that is a parallel body to the HPC. 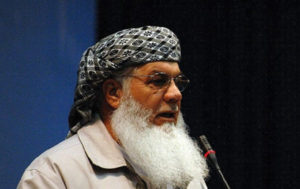 As per a statement by the Presidential Palace, President Ghani began consultations and discussions with political parties and former jihadi leaders over the formation of a negotiations team on peace.

The Presidential Palace stated on Friday that President Ghani met with a several political figures and former jihadi leaders including Abdul Rab Rasul Sayyaf, former vice president Mohammad Yunus Qanuni as well as members of Jamiat-e-Islami’s leadership Salahuddin Rabbani and Atta Mohammad Noor to discuss the establishment of the advisory board.