President Ghani on Saturday met with Haji Mohammad Mohaqiq and other political leaders to discuss the ongoing efforts regarding reconciliation process, as reported by a statement from presidential palace.

The statement added that President Ghani held talks with the political leaders regarding the establishment of peace consultative board, high peace council activities, formation of peace negotiators delegation, as well as establishment of several committees in the event peace talks commence. 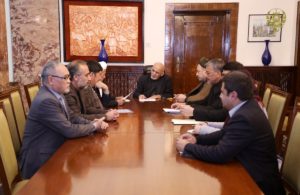 President Ghani also listened to the opinions and suggestions of the political leaders and called their views as crucial to reach to a peace deal.

The president emphasized that national consensus is a key foundation of government’s activities and expressed that consultations would be foundation for peace as well.

According to President Ghani, the main purpose of the peace consultative board is “to prepare for peace talks and to establish a specific address for Afghan-led peace talks.”

This comes as President Ghani had earlier met with Jamiat Islami and Hezb Islami leaders, Senate Chairman, and some other political leaders to consult on peace process.