The US defended its attack that allegedly killed at least 32 farm workers and wounded 40 others including many children claiming that the group was actually ISIS fighters pretending to work as harvesters.

“There were IS (fighters) there, but it appears during harvest season the locals cut deals with the IS fighters to act as harvesters,” said a senior U.S. official who is privy to the counter-terrorism operations conducted by American forces in Afghanistan.

“We were not privy to this ‘agreement’ that puts them (IS fighters) amongst other harvesters. We are working through it now with the officials,” he told Reuters.

The farmers had just finished work and were sitting by a fire when the strike happened, according to tribal elder Malik Rahat Gul. 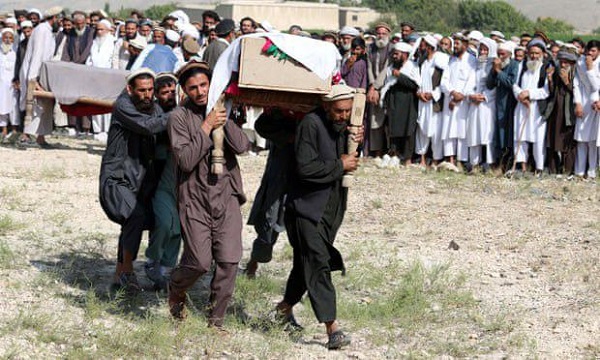 The air strike was aimed at destroying a hideout used by Islamic State militants, but it accidentally targeted farmers near a field, Afghan officials were quoted as saying.

In a statement, Colonel Sonny Leggett, the spokesman for the U.S. campaign in Afghanistan, said the attack was aimed at “Da’esh (IS) terrorists in Nangarhar” province.

However, Leggett said, the blame for the massacre is squarely on IS and the Taliban—not U.S. forces.

“We are fighting in a complex environment against those who intentionally kill and hide behind civilians, as well as use dishonest claims of noncombatant casualties as propaganda weapons,” Leggett said.

Human rights group Amnesty International, in a statement, said that the strike was “unacceptable and suggests a shocking disregard for civilian life.”