Acting Minister of Defense Asadullah Khalid has said that to further the development of Afghan forces, a Commando division was promoted to Corps, and the 20th Pamir division also promoted to 217 Pamir Corps.

“Commando is backbone of our Afghan army. They have operations on daily basis in different parts of the country” said Khalid.

He clarified that the ANATF was created based on needs and previous experience. He stated that currently Afghanistan has 55 territorial forces Tolai (Company); of which 33 tolai are assigned in different parts of the country and rest are under training. 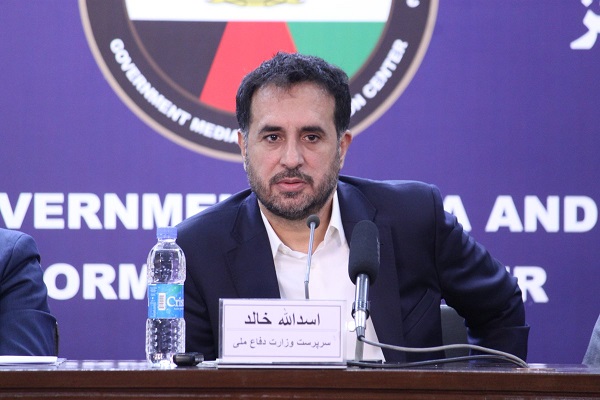 He added that the AAF were provided with 18 MD530 helicopters in 1397 and will receive 10 more till the end of this year.

With respect to veterans, he said that 1884 people were retired but 2858 young officers recruited. 85 Generals and 966 Colonels were also retired in past year.

“To fight against corruption, 99.9 percent of Afghan Army personnel were entered to biometric system. 3930 corruption dossiers were reviewed”, he explained.

Khalid described that 90 percent of MoD development budget was spent in FY 1397 and they have put efforts to turn their HR system into electronic system. Now, 93 percent of Afghan Personnel and Payment System (AAPS) is completed and with full implementation of this system a new chapter will be opened in MoD.

Khalid assured that houses were provided for 31 families of martyrs and residential lands were distributed to 34 others, along with scholarships being provided to dependents of martyrs.

“Overall, 16331 people including 2161 officers, 1904 Lieutenant and 12225 soldiers graduated from ANA training centers. 1166 others were sent to abroad to pursue their higher educations”, he stated.

Khalid conceded by saying that their plan for near future is to remove the small checkposts and create strong bases that have the ability to defend, maneuver and attack.