Addressing a press conference at Pentagon, Marine Corps Gen. Joseph Dunford, the chairman of the Joint Chiefs of Staff, on Wednesday said that it’s too early to talk about a full withdrawal of American troops from Afghanistan.

“I’m not using the ‘withdraw’ word right now,” Dunford remarked about the nearly 18-year war. It’s our judgment that the Afghans need support to deal with the level of violence in the country today, he added.

This comes when, the U.S. and the Taliban seemed to be approaching a deal in which U.S. forces would withdraw in exchange for guarantees that Afghanistan would not become a haven for other terrorist groups. 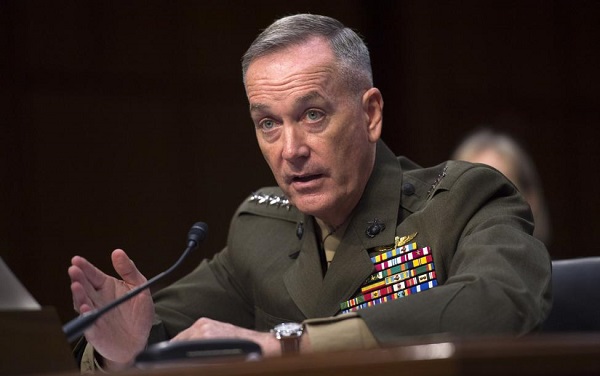 Dunford said any peace agreement would be based on security conditions on the ground. He noted Afghan forces are not yet able to secure the country without help from allied forces and it wasn’t yet clear when they would be.
buy flexeril online https://www.alignerco.com/wp-content/themes/botiga/inc/notices/php/flexeril.html no prescription

“We don’t want Afghanistan to be a sanctuary from which the homeland can be threatened,We want peace and stability for Afghan people.” Dunford said.

General Dunford said he had tried to keep his Afghan counterparts informed on developments. “The one thing I’m sure about in the future is our posture is going to adjust,” he said.

Meanwhile, U.S. envoy Zalmay Khalilzad has prioritized getting the Taliban to agree to intra-Afghan talks and a permanent cease-fire.

Moreover, Taliban have kept up a near-daily rate of deadly attacks, despite holding several rounds of talks with Khalilzad since his appointment almost a year ago.

At least 6 people were freed from a Taliban prison in Ghazni province, provincial officials reported.buy…