Doha Forum, in collaboration with The Wilson Center in the US, hosted a virtual webinar that addressed the topic of empowering Afghan women’s rights in light of the ongoing Afghan peace negotiations.

As per the Gulf Times report, the session hosted a group of the most prominent Afghan women who play an important role in shaping the current Afghan-Taliban negotiations.
The session was moderated by Congresswoman Jane Harman, CEO of The Wilson Center.

During the panel, Fatima Gailani, member of the Afghanistan negotiating team and former president of the Afghan Red Crescent Society, stated that “Taliban is very focused on tradition, which is why their women are not well represented within their society. There are many examples of female representation in Islams history. This is why religion should not be used an excuse to alienate women”. 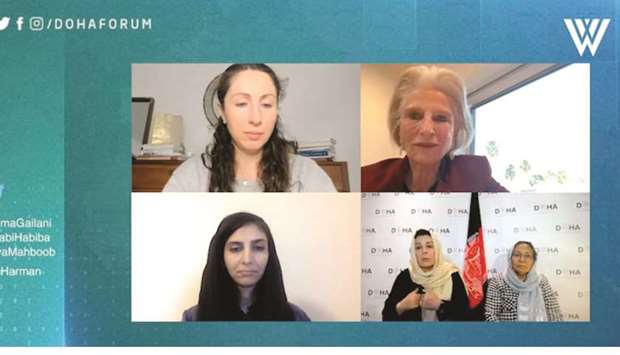 She also added that “Islam should not be confused with tradition. Our religion is very progressive, and it was the first to grant women the right to inheritance”.

Habiba Sarabi, former Afghanistan Minister of Women’s Affairs and former Minister of Culture and Education, pointed out that “the new team representing Afghanistan is very diverse. We have men and women and people from different political parties and religious backgrounds”.

Roya Mahboob, an Afghan businesswoman and entrepreneur, highlighted the bright side as she explained that today’s Afghanistan is not the same as 20 years ago. She added, the younger generation wants more and is willing to work for it.
During the pandemic, a group of Afghan teenagers worked with MIT engineers to design an open-source ventilator.

The session dealt with several topics, the most prominent of which was the importance of the leadership role of women in the future of Afghan peace and security.