Pakistan has expressed hope for peace in Afghanistan, but at the same time said that responsibility for a reduction in violence in that country “cannot be shouldered by the Taliban alone”.

The comments were made by Pakistan foreign minister Shah Mahmood Qureshi during a press conference in Islamabad on Wednesday following a meeting with an Afghan Taliban delegation led by Mullah Abdul Ghani Baradar.

Qureshi said Pakistan wants a reduction in violence and wants it to proceed towards a ceasefire. “For a stable Afghanistan, a comprehensive and inclusive settlement is required,” he told the media. 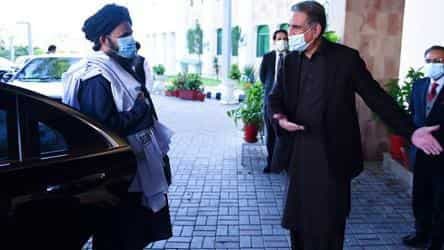 A delegation of the Taliban Political Commission (TPC), headed by Baradar, arrived in Islamabad under tight security on Wednesday on a three-day trip during which the delegation will also be meeting with Pakistan Prime Minister Imran Khan.

In his press conference, Qureshi said that peace talks have now begun, but the reduction in violence that was expected is so far not being witnessed.