The Acting Finance Minister, Mohammad Khalid Payenda, says that in the third draft budget for the fiscal year of 1,400, the necessary changes have been made and the concerns of the Lower House of Parliament have been resolved.

Speaking at a press conference on Thursday, Mr Payenda said that in the next fiscal year, the salaries of teachers and low-level civil servants would increase significantly.

According to Mr. Payenda, the private sector, teachers’ salaries, civil servants and soldiers, and internal revenues are dependent on the budget, and the non-approval it would have dire consequences. 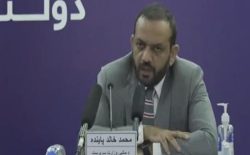 “Any delay in approving the budget could damage national income, increase poverty and unemployment,” he said. “If the budget is not approved, we will not be able to achieve the revenues we have set.”

Mr. Payenda added that Afghanistan’s economy has been damaged by the coronavirus pandemic and will face difficulties in compensating and improving the situation if the budget is not approved by the House of Representatives.

The Acting Minister of Finance expressed hope that the House of Representatives would approve the third draft budget in the coming days.