Ahmad Zia Saraj, the Director National Directorate of Security (NDS) says a two-day meeting of regional countries for the fight against terrorism has been held in Kabul, Afghanistan.

“This two-day meeting, titled ‘Regional Counter-Terrorism Conference’, was attended by the ministers and heads of national security and intelligence services from eight countries, including the United States, Pakistan and Azerbaijan, Uzbekistan, Tajikistan, Kazakhstan, Kyrgyzstan and Turkmenistan,” Zia Saraj said at a pres conference on Thursday.

According to him, the meeting was held following the continuation of the Afghan government’s efforts to attract the support of regional countries and the world in the fight against terrorism -and support for the peace process led by Afghans.

Mr. Siraj said that high-ranking officials of the intelligence services of the mentioned countries praised NDS for the initiative for holding the meeting.

Mr. Saraj said that during the meeting, the representatives of NDS presented information and documents on the presence and widespread activities of terrorist groups in Afghanistan, noting that the activities of the Afghan government in the fight against terrorism is a step towards peace and stability in the region. 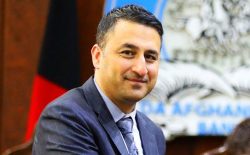 “It was stated at the meeting that the Afghan Defense and Security Forces have a prominent role to play in the fight against regional terrorism. The main goal of these forces is to protect Afghanistan from common regional threats and to prevent the spread of these threats to countries in the region,” he added.

Mr. Saraj said that the representatives of the participating countries, while acknowledging Afghanistan’s prominent role in the fight against terrorism at the regional level, accepted the Afghan government’s concerns and acknowledged the growing number of terrorist groups in the region.

The director of NDS said that several issues were agreed upon at the meeting.

According to him, from now on, common threats will be identified and actions will be taken to eliminate them, and the process of information exchange between intelligence services will be accelerated.

He added that NDS intends to host regional security meetings in the near future to form a regional consensus against terrorism.

Protesters in Kabul: Govt Neglecting in Investigation of Targeted Killings