Almost 12% of the American soldiers posted in Afghanistan have had suicidal thoughts at least once in their lives. More to the point, 3% thought of suicide at least once over the past year, and almost 2% over the last month, according to the questionnaires filled in by a sample of soldiers midway through their stay in that country, in 2012.

The rate of suicide is much higher among soldiers in combat compare to those who were never deployed. 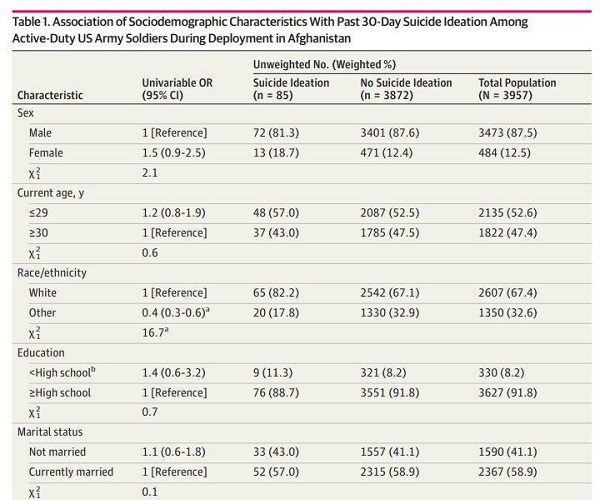 The midpoint of deployment was chosen for assessment of soldiers’ self-reported suicidal ideation and mental health disorders because that is when risk for suicide attempts appears to peak.

The authors report risk factors associated with recent suicidal thoughts during deployment included race (being white) and previous major depressive disorders and non-combat trauma. A substantial proportion of deployed soldiers with suicide ideation did not report any mental health disorders.

The crucial importance of Afghan women’s meaningful participation in peace efforts, locally and nationally, was the…

Foreign Ministers of Uzbekistan, Germany Discuss Cooperation in Regulation of Situation in Afghanistan

Afghanistan has appreciated Turkey’s continued support and efforts for the peace process in the war-ravaged country,…