Kabul: The Ministry of Defense (MoD) stated that efforts are ongoing to recapture all lost districts within a clear plan.

Deputy MoD Spokesman Fawad Aman said that the people in Taliban-controlled areas are oppressed and that the ANDSF will free the lost territories and save the people from Taliban oppression.

Also, in the presence of Ghor’s civilian and military leadership, and commanders of the people’s uprising forces, Provincial Governor Abdul Zahir Faizzada spoke about preparation for military operations to suppress the Taliban, provide facilities, defend the provincial capital, and retake the lost territories.

It was then decided at the meeting that all ANDSF, including the uprising forces, are jointly ready to defend, and that those who cooperate with the enemy and operate against the regime should be separated.

It was also decided to provide more combat facilities to the joint security forces, transit to offensive mode, retake the lost areas and districts, establish strong urban security belts, and establish security bases along the highways. The elders and commanders of the uprising forces once again pledged to resist against and suppress the Taliban.

In an airstrike conducted by the ANDSF in Bandar-e Imam Sahib of Kunduz city, Kunduz province last night, two Taliban insurgents including a key commander named Suhrab were killed and 2 others were wounded, the MoD reported. A vehicle, weapons and ammunition were also eliminated during the attack, the MoD added.

Also, social media activists launched the Twitter campaign #Stand4ANDSF to support the ANDSF and people’s uprising forces. The campaigners stated that the Taliban have failed to comply with human rights and values, and harmed civilians. They called for an end to political interference in security agencies, and urged the government manage the battlefield and allow the ANDSF to suppress terrorists. 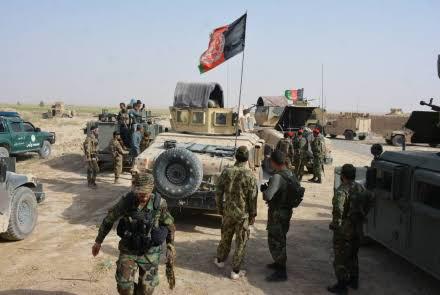 Spin Ghar District Governor Mohammad Yasin said that two mortar rounds impacted residential areas in Sur Qamar area of the district early on Thursday morning, which killed five children and wounded two others. The governor blamed the Taliban for the mortar attack. The Taliban have yet to comment on the report.

In other news, Kabul’s provincial police arrested six armed robbers, including a woman, with a vehicle, two number plates, six sets of mobile phones, and a gun during an operation in Bagrami district, the MoI reported. These robbers were active in PDs 8, 9, 12, 16, 19, and Bagrami district and have confessed to have assassinated five government employees and civilians in Kabul and Logar provinces, and stolen two vehicles from Kabul city, the MoI added.

Meanwhile, as part of his visit to the UK, NSA Hamdullah Mohib met Baroness Fiona Hodgson of Abinger CBE, member of the House of Lords. The two sides exchanged views on the situation in Afghanistan and discussed ways to support Afghanistan, including protecting women’s and human rights.

Also, Mohib, met Stephen Lovegrove, national security adviser of the UK. NSA Mohib and Lovegrove discussed the continuation of cooperation on matters of peace, security and counterterrorism between the two governments. Lovegrove said that the UK is keen to continue supporting Afghanistan and will work with Afghanistan to shape the cooperation. The two NSAs reinforced their desire to work jointly with regional counterparts in support of shared goals in security and preservation of common achievements.