Responding to another question on Afghanistan, Khan said his government had decided to put an end to the decades-old policy of interfering in Afghan politics to avert the danger that Pakistan might someday confront an Afghan-Indian alliance.

“The fear amongst the Pakistani military establishment was always that there would be a two-front situation…you know, the eastern front, which is India. And then, if Afghanistan was also in the Indian sphere of influence, then Pakistan would be sandwiched between these two,” Mr Khan said. 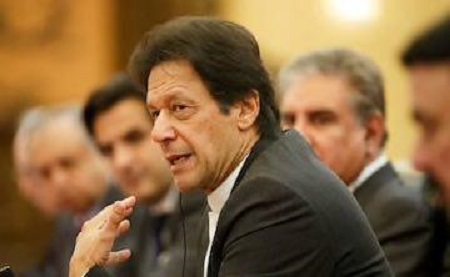 The Pakistani security doctrine had sought “what was called the ‘strategic depth’ of being able to influence Afghan affairs”, he said, adding, “But this has changed. Today, we feel that by interfering in Afghanistan in order to secure the strategic depth, we have actually done a lot of damage to our own country and…we have become partisan in Afghanistan’s internal affairs.”

Imran Khan, who was accompanied by his top military officers during his three-day official visit to the US, said that he spoke for Pakistan’s army in saying that “we should not ever interfere in the internal affairs of Afghanistan”.

“Let the Afghans decide what they want, what sort of government they want and we should facilitate the peace process. So, this is the big difference. Now, we are all on the same page. And fortunately, now the United States is on the same page too,” he said.

The Pakistani prime minister said he had previously declined to meet the Afghan Taliban leaders, following objections by the Afghan government.