The chairman of the US Joint Chiefs of Staff has traveled to Afghanistan’s capital of Kabul for consultations with U.S., NATO and Afghan officials.

Marine Corps Gen. Joe Dunford said he wants to ensure Army Gen. Austin S. Miller, the commander of the Resolute Support effort in Afghanistan, has all he needs, as per US Department of Defense.

Gen Dunford said he wanted to see the pulse of operations in the country in advance of the national elections in September. The Afghans were holding a “rehearsal of concept” for the elections as he arrived. 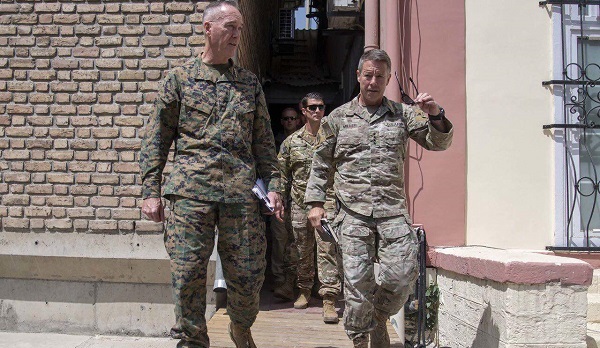 “That is clearly a big priority for them, [and they are] making sure they have everything in place,” Dunford said in an interview with reporters traveling with him.

“Government and coalition forces are also working to support the negotiations process as it takes place. U.S. envoy Zalmay Khalilzad has been meeting with Taliban negotiators in Doha, Qatar, most recently earlier this month. He is in Kabul now, speaking with members of the Afghan government as he works to encourage inter-Afghan conversations between the Taliban and the government”, the statement added.

The negotiations have not changed the military mission in the country, Dunford assured.

“Day to day, the mission hasn’t changed for General Miller and the team, and they are still taking the fight to the Taliban and supporting the Afghan military,” he said.