Kabul: The Kabul police announced on Thursday that 18 people from different parts of Kabul have been arrested as a result of several police operations.

Basir Mujahid, a spokesperson for the Kabul Police, said that the men had been detained as a result of several operations over the past two days. He added that the detainees were charged with murder, wounding, armed robbery, robbery, telephone and vehicle theft. 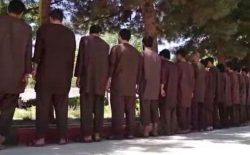 According to him, these individuals have been identified and arrested in the third, fourth, fifth, sixth, seventh, eighth, ninth, tenth, sixteenth, seventeenth, eighteenth and nineteenth PDs of Kabul.

The Kabul police spokesperson said that they had also seized four rounds of ammunition from them.
buy prednisone online http://www.suncoastseminars.com/assets/new/prednisone.html no prescription

In recent months, however, criminal offenses, especially armed robberies, have increased in Kabul. The Security Pact program, launched months ago to reduce crime, has failed to reduce crime in Kabul as much as possible.