Kabul: With less than 100 days remaining before the September 11 deadline for US troops to withdraw from Afghanistan, many organizations and politicians are coming forward to urge the Joe Biden administration to hasten the evacuation process of Afghan interpreters.

A Republican congressman Michael Waltz implored President Biden on Wednesday to immediately order the evacuation of Afghans who helped US troops. “If he doesn’t act, and he doesn’t get these people out, blood will be on his hands and on his administration’s hands,” said Waltz. “The time for talk, the time for debate is over,” he added.

At the heart of the issue is the Special Immigrant Visa (SIV) program for Afghans who worked for US troops. The program has been plagued with years-long delays and faces a backlog of thousands of applicants. The Biden administration has said it is accelerating processing the applications, but lawmakers have warned there is not enough time, leaving Afghans who helped the United States at risk of being hunted down and murdered.

Lawmakers and others have been urging the administration to evacuate those at-risk Afghans to Guam or another safe location while they wait for the applications to be processed. Waltz was speaking at a news conference alongside members of the American Legion and Republican Jason Crow (D-Colo.), all amplifying the call for an evacuation. “I think the most practical thing is to evacuate pending applicants to Guam,” Crow said. “We have a history of doing it. We don’t have to reinvent that wheel.”

The United States used Guam as a way station in 1975 while it processed Vietnamese refugees it evacuated amid the fall of Saigon.

The American Legion, a non-profit organization, also demanded that the US government act now as failure to do so puts the lives of these translators and their families in serious jeopardy as they face death threats from ISIS, the Taliban, Al Qaeda and others. 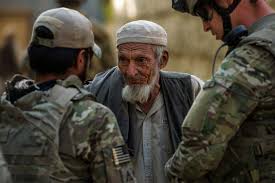 “Our wartime allies saved countless American lives despite grave dangers to themselves and their families,” American Legion National Commander James W. Bill Oxford said. “It would be a moral failure to withdraw our troops and leave behind the brave Afghan interpreters who stood shoulder-to-shoulder with US troops through multiple operations,” he said.

As of April 2021, there are approximately 18,000 Afghan interpreters in limbo under the SIV program due to bureaucratic red tape and limited spots.

Meanwhile, US President Joe Biden and Russian President Vladimir Putin agreed on Wednesday to begin cybersecurity and arms control talks at a summit that highlighted their discord on those issues, human rights and Ukraine. In their first meeting since he took office in January, Biden asked Putin how he would feel if a ransomware attack hit Russia’s oil network, a pointed question making reference to the May shutdown of a pipeline that caused disruptions and panic-buying along the US East Coast.

While Biden stressed that he did not make threats during the three-hour meeting, he said he outlined US interests, including cybersecurity, and made clear to Putin that the United States would respond if Russia infringed on those concerns. Both men used careful pleasantries to describe their talks in a lakeside Swiss villa, with Putin calling them constructive and without hostility and Biden saying there was no substitute for face-to-face discussions.

US-Russia relations have been deteriorating for years, notably with Russia’s 2014 annexation of Crimea from Ukraine, its 2015 intervention in Syria and US charges – denied by Moscow – of meddling in the 2016 election won by Trump.

Both Biden and Putin said they shared a responsibility, however, for nuclear stability, and would hold talks on possible changes to their recently extended New START arms limitation treaty. In February, Russia and the United States extended New START for five years. The treaty caps the number of strategic nuclear warheads they can deploy and limits the land- and submarine-based missiles and bombers to deliver them.

A senior US official told reporters that Biden, Putin, their foreign ministers and interpreters met first for 93 minutes. After a break, the two sides met for 87 minutes in a larger group including their ambassadors.