Also, 21 Taliban insurgents including “Nikmal” with two of their commanders were killed in commando forces operations at the outskirts of Takhar province, on Wednesday night. Nikmal was the Taliban commander for northeast zone of the country, as per MoD statement. Security officials announced the launch of a clearance operation in Sartagab area of Pato district, Daikundi province. Deputy Provincial Police Chief Naqibullah Malistani said that the ANDSF and people’s uprising forces jointly launched the operation Thursday morning, and the provincial directorate of security head is leading the operation.

Provincial Governor’s spokesperson Sarwar Barlas told Etilaat Roz that the ANSDF along with people’s uprising forces launched the clearance operation at 02:00am and cleared the village, at 01:00pm on Thursday afternoon. The Taliban captured Sartagab area a few days ago, which forced hundreds of local residents to flee.

Member of Parliament (MP) for Daikundi province Shirin Mohsini also reported that 95% of Sartagab was cleared of insurgents. Provincial officials said that the Taliban still resisted against the ANDSF and people’s uprising forces and sporadic clashes are ongoing. Malistani claimed that 15 Taliban insurgents were killed and 40 others were wounded, during clashes over the past 2 weeks.

Also, local officials in Parwan province claimed that Shakil, Taliban’s deputy shadow governor for the province, who was a Pakistani national, has been killed by the ANDSF. Provincial Police Chief Abdul Rauf Uruzgani said that Shakil was deputy to Taliban’s shadow governor, Farid Qiyam, and succumbed to his injuries. 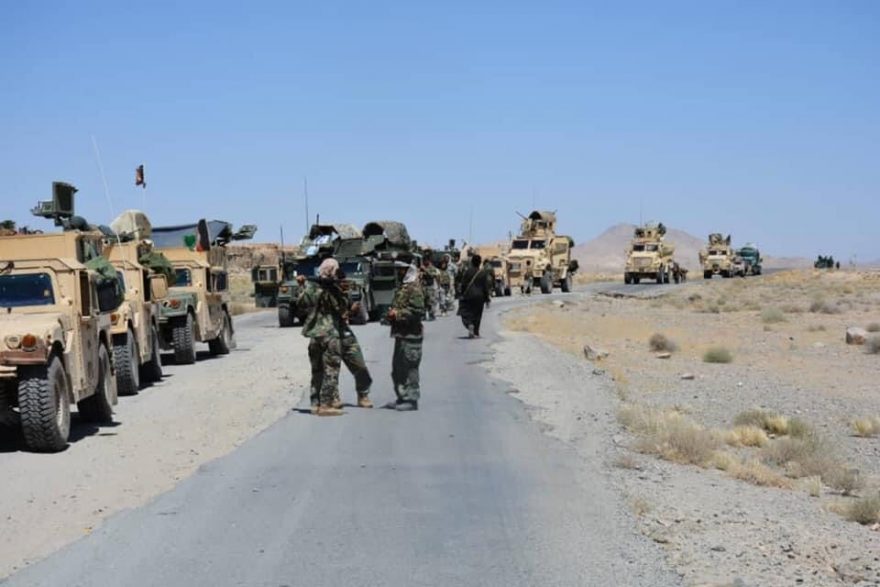 Also, Acting Interior Minister Abdul Sattar Mirzakwal traveled to Kunduz province, to manage the war against the Taliban. The Ministry of Interior (MoI) stated that Mirzakwal held a security meeting with provincial officials, upon arrival. The MoI added that Mirzakwal assessed fighting methods, particularly the way the forces were shifted, and provided instructions to fill the security gaps. Mirzakwal said that coordination and unity were the main factors for the success of the ANDSF against the Taliban and called for joint planning and execution of anti-terrorist plans.

Also, a group of 130 Taliban members laid down their weapons and joined the peace process in the western province of Herat on Thursday morning, local officials said. The group was active in the Zer-e-Koh district, according to officials. The group leader, Mardan Noorzai, said that “with the withdrawal of foreign forces from the country, the time of jihad is over, and we will no longer continue to fight the country’s military.”

Provincial Governor Abdul Saboor Qane said that with the joining of these men in the peace process, “security will improve in Zer-e-Koh and Shindand districts. These men will be sent back to Zer-e-Koh in support of the security force members in fighting against the Taliban.” The Taliban is yet to comment on the report.

Addressing Kakar’s funeral ceremony, Achakzai claimed that Kakar did not die due to COVID-19, but because he was “oppressed.” Radio Azadi reported that Achakzai accused Pakistan’s Inter-Services Intelligence (ISI), and added that Kakar had told the Senate that he had been warned to avoid speaking in defense of Pashtun rights. Pakistan’s Army is yet to comment on the claims. Kakar fainted at his residence last week, and was transferred to hospital, and died on Monday, aged 60.

Meanwhile, regional partners are too concerned with the rising violence. In fact, Tajik President Emomali Rahmon had telephone conversation with his Kazakh and Uzbek counterparts to discuss the latest developments in northern provinces of Afghanistan, which border Central Asia’s nations, according to the Tajik president’s official website.

Emomali Rahmon and Kazakh President Kassym-Jomart Kemeluly Tokayev, in particular, noted that the current situation in Afghanistan leads to rising tensions and negatively affects regional security. In this regard, the parties reportedly noted the importance of continuing close coordination between the relevant agencies of the two countries both on a multilateral and bilateral basis. They emphasized on the importance of comprehensive assistance in the practical launch of the inter-Afghan negotiation process.

Kabul: According to the official statistics of the Ministry of Public Health (MoPH) on Thursday, 63…