Kabul: The Turkish Defense Minister Hulusi Akar on Wednesday clarified that Turkey would not send additional troops to Afghanistan as part of a plan to run and secure Kabul’s airport after the United States and NATO withdrawal from the country later this year. Turkish and US military officials met in Turkey’s capital on Thursday to discuss plans for Turkish troops to continue securing Kabul’s airport.

Turkey has offered to take responsibility for securing Kabul International Airport following the US departure from Afghanistan in September. Ankara has been holding talks with the United States on logistic and financial support for the mission. “At the moment, we’re not in any situation to send (new) soldiers,” Turkey’s top defense official said, noting that Turkish forces have already been protecting Kabul airport for six years.

Last week, President Recep Tayyip Erdogan said after a meeting with US President Joe Biden on the sidelines of a NATO summit, that Turkey was looking for “diplomatic, logistic and financial assistance” from the United States to protect and operate the airport. Turkey also wanted Pakistan and Hungary to be involved in the mission, he said. Defense Minister Hulusi Akar said a technical delegation from the United States had arrived for talks.

“We will continue to take on the responsibility of operating the Hamid Karzai International Airport, which we have been doing for the past six years, if the necessary conditions are met,” Akar said on Thursday. “Discussions on this matter are continuing. No decisions have been reached for now.”

Akar said, “We want to achieve the best result for the interests of our country and for those of Afghanistan. That’s what we are working for. Our aim is to continue working for the security, peace and welfare of our Afghan brothers.”

Turkey maintains some 500 troops in Afghanistan, the largest remaining foreign military contingent, and has played a key non-combat role in NATO missions in the country since 2003. 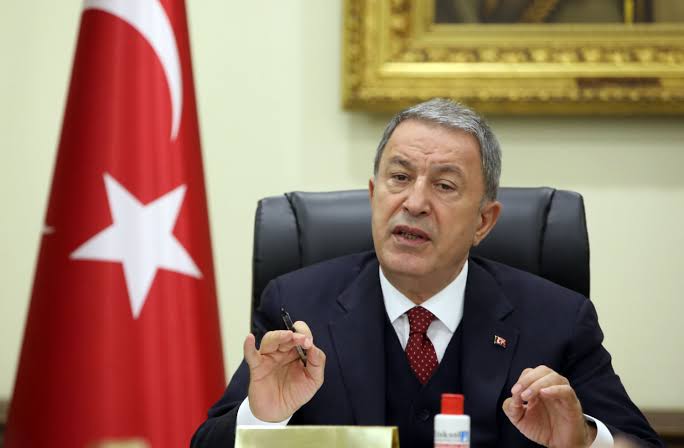 On the other hand, Azerbaijan and Turkey on Wednesday lauded Pakistan for the role it has played in promoting peace in the region, especially the country’s efforts for peace in Afghanistan. According to a statement issued by the Inter Services Public Relations (ISPR), Pakistan Chief of Army Staff General Qamar Javed Bajwa held a meeting with Azerbaijan’s Minister of Internal Affairs Colonel General Eyvazov Vilayat Suleyman oglu, the country’s Chief of State Border Service (SBS) Colonel General Elchin Guliyev and Chief of State Security Service Colonel General Ali Naghi Oglu Naghiyev at Baku, Azerbaijan. “Emerging geo-strategic paradigm in the region necessitates our close cooperation and collective response against common challenges,” Gen Bajwa told the officials. Azerbaijan officials also lauded the Pakistan army for its “contributions for conflict prevention in the region especially efforts for bringing peace in Afghanistan”.

Also, as Pakistan is expected to be the main point of discussion during Afghan leaders’ visit at the White House this week, Pakistan has reached out to the Afghan government conveying it in clear terms that the upcoming visit must not be used to blame Islamabad, officials told The Express Tribune. Afghan President Ashraf Ghani and chairman of Afghanistan’s High Council for National Reconciliation Abdullah Abdullah left on Thursday for a two-day visit to the United States to meet US President Joe Biden.

Pakistan’s ambassador to Kabul met Afghan leaders from across party lines and Foreign Minister Shah Mahmood Qureshi also interacted with Dr Abdullah as well as his Afghan counterpart Hanif Atmar at the sidelines of the recent Antalya Diplomacy Forum in Turkey. Officials have said that Pakistan fears that ‘spoilers’ within the Afghan setup may use the upcoming visit of President Ghani and Dr Abdullah to blame Islamabad for the failure of peace talks in the conflict-torn country.

At the recent Afghan Track-11 dialogue, Qureshi stressed that Ghani might use the upcoming visit to the White House to blame Pakistan. “If the objective [President Ghani’s visit] is to start a new blame game and hold Pakistan responsible for all the ills, I think it will not help. It’s a shared responsibility and no one is going to buy this anymore. We will not take any responsibility. We have been accused enough,” he said.

The Taliban, meanwhile, reacted to the visit and termed it “useless”. “They [Ghani and Abdullah] will talk with the US officials for preservation of their power and personal interest. It won’t benefit Afghanistan,” Taliban spokesperson Zabihullah Mujahid said.