Zarifa Ghafari is a fearless woman in a country where there is much to fear.

Since taking office as mayor in the Afghan town of Maidan Shahr last year, the 27-year-old has been attacked by mobs of men armed with sticks and rocks, angry at a woman in a leadership role. In meetings, she has been at turns ignored, insulted and laughed at. She has received death threats from the Taliban and criminal gangs. 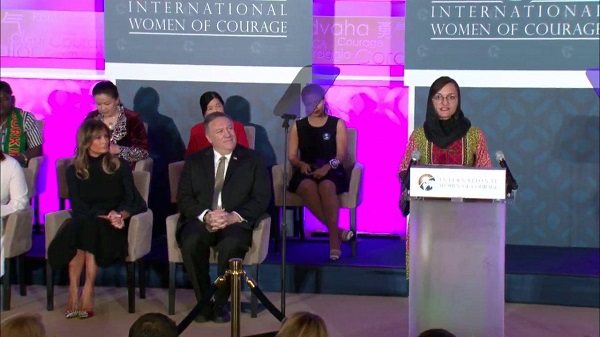 “I want to live as a champion,” she said in an interview Wednesday after being honored at the State Department with an International Women of Courage Award presented by first lady Melania Trump and Secretary of State Mike Pompeo. “I want to die as a champion.”

Their stories “humble and inspire us all,” said Pompeo, who recently returned from Qatar, where he witnessed the signing of an agreement between the Taliban and the United States.

She recognizes the danger she will face on returning to Afghanistan but considers it her responsibility to speak up.
buy xifaxan online http://www.handrehab.us/images/patterns/new/xifaxan.html no prescription

“At least if I die, no one will say, ‘She was not someone who did great,’ ” she said. “I want the next generation to remember me as a good person, at least as someone who could make at least a change, at least could talk of the truth. That’s why I’m talking.”