At least seven Afghan security force members have been killed in a Taliban attack at a local army checkpoint in Parwan province, local officials said. In the wake of the Taliban-initiated Eid ceasefire coming to an end, this is the first reported attack by the group.

A spokesperson for the Parwan governor, Wahida Shahkar, said the Taliban had attacked a local army checkpoint in a remote area of Seyagerd district at around 2 am on Thursday.

Shahkar added that one soldier had also been wounded in the Taliban attack, while two others had been captured and taken back.

The Taliban has not commented on the attacks. 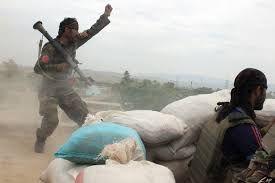 The fate of the ceasefire

During the three days of the ceasefire, no attacks were carried out by the government forces, the Taliban, and the U.S.-led allied troops. However, reports have come in of small attacks yesterday that are being attributed to the Taliban. A large number of government forces have been killed.

However, neither side has officially announced the end of the ceasefire. At the same time, the Afghan security and defence forces are in a defensive mode, and no order has been issued to attack. The Eid ceasefire and its continuation has raised hopes for the success of the intra-Afghan peace process.