Prior to becoming service Secretary, Barrett was a member of the US-Afghan Women’s Council, according to her Air Force biography. But while she has an established track record of visiting Afghanistan as part of her collaboration with its female citizens and businesswomen, this was her first visit to the country as SECAF. 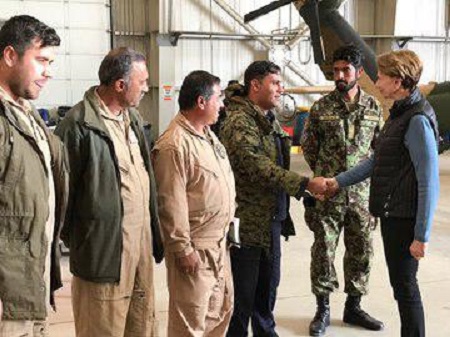 “I’m here because it is such an important location, and it is a place where America is making a difference,” Barrett said in the release. “Aviation is how we project power in this area, and the airmen here at Bagram are a huge part of the reason why those efforts are successful.”

During the stop, the leaders hosted an all-call that tackled audience questions on topics ranging from “gender equality and technological advancements, to enlisted education and the development of the Space Force,” and they learned about the wing’s roles in Operations Freedom’s Sentinel and Resolute Support, the release stated.

“The air component is absolutely critical to our success here because we bring the asymmetric advantage that our forces need to be able to prevail,” Goldfein said in the release. “We’re also helping build an Afghan air force so they can police their own borders, which is what we’re after in the end.”