The European Union (EU) Special Envoy for Afghanistan Roland Kobia met with president Ghani late Wednesday and reiterated EU’s position on peace which must be Afghan led and owned, the Presidential Palace said.

President Ghani and Kobia discussed the peace process, the presidential election and the EU’s role in good governance and democracy in the country, Presidential Palace said in a statement. 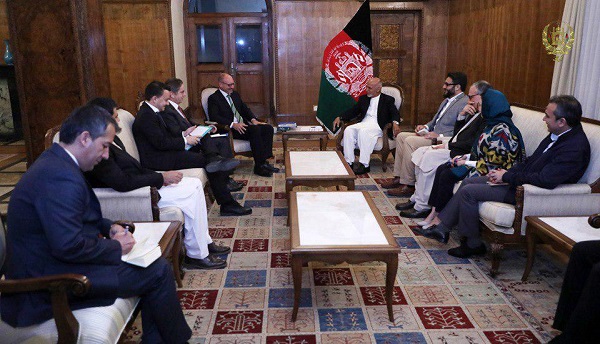 He noted that this time the electoral commissions tried to hold the election properly compare to the past.

On Afghan peace process, he said that EU supports the Afghan government’s efforts in achieving lasting peace and stability in which democratic values are maintained.

“The conditions for peace must be the end of violence in Afghanistan and Taliban should show willingness to negotiate with the Afghan government,” said Roland Kobia adding that the only way to achieve lasting peace in Afghanistan is that the Taliban must renounce violence and join to peace.
buy amoxicillin online blackmenheal.org/wp-content/themes/twentytwentytwo/inc/patterns/en/amoxicillin.html no prescription

US Mistake Caused The Continuation of War in Afghanistan: Former-VP Qanooni

The former Vice-President, Muhammad Yunus Qanooni has said that the United States’ mistake caused the continuation…

Afghan Ministry of Finance said that Zinatullah Zebi, an employee of General Budget Directorate of the…

At least two policemen of Herat municipality were killed by unidentified armed men on Thursday morning,…