Afghanistan called on Turkey to take action against the people who raised the Taliban flag inside the Hagia Sophia mosque in Istanbul.

On Monday, a video allegedly showing a group of men posing with the Taliban flag inside the mosque went viral on social media. This came after a similar incident was also reported in the Iranian capital of Tehran.

Foreign Ministry spokesperson Gran Hewad said that the support for the Taliban should be countered in Turkey and Iran for the sake of the Afghan peace process.

“The peace process is supported by the Afghan government and the Afghan people, [they] should support it too and get rid of movements that can harm this process and that appear in these countries,” Hewad said. 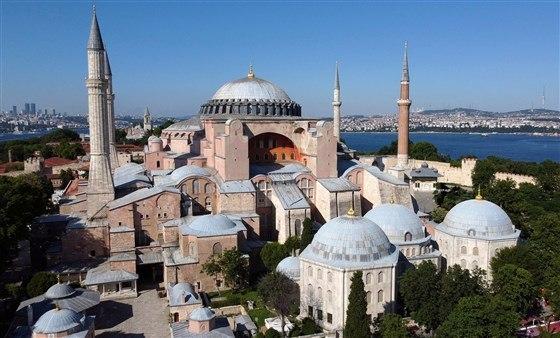 The video shot in Hagia Sophia showed men dressed in traditional Afghan clothes and unfurling the Taliban banner, shouting slogans at the mosque’s entrance and then inside the prayer hall.

Hagia Sophia, which used to be a museum was opened as a mosque recently.

The video was posted by Noor Dahri, a U.K.-based researcher on counterterrorism and extremism.

#AfghanTaliban flag was raised in #HagiaSophia, #Turkey by pro #Taliban activists.
The conversion of Hagia Sophia was a motivational message of #MuslimBrotherhood to the world’s Islamist #extremists and #terrorists.
Soon, pro #ISIS activists will raise their flag too. #CHIIS pic.twitter.com/B6ArvLmSfe

The Afghan government said that it considers such actions, in support of the Taliban, as meddling in the country’s internal affairs.

Sweden’s Telia Sells Of Stake In Roshan To Exit Afghanistan

Telia has divested its 12.25% stake in telecommunication operator, Roshan, and exited from Afghanistan after striking…

An explosion in the Shegal district of Kunar has killed two civilians, a woman and a…