The outgoing Pentagon senior enlisted adviser and his incoming replacement weighed in on reporting Monday that military leaders have been misleading the American people about the direction and success of the war in Afghanistan since within months of U.S. troops hitting the ground in October 2001, roundly denying that they ever felt lied to about the mission and touting the progress the country has made in the intervening years.

As per the Military Times report, US Army Command Sgt. Maj. John Troxell, the senior enlisted adviser to Chairman of the Joint Chiefs of Staff Army Gen. Mark Milley, told reporters that while he had not fully read the Washington Posts’s “Afghanistan papers” story, he disagreed with assertions that either the troops or public had been manipulated into believing a certain narrative about the war.

“It has been baby steps as we move forward to assist the Afghan military in securing the Afghan nation,” Troxell said. “And it’s going to be step by step as we get after business.” 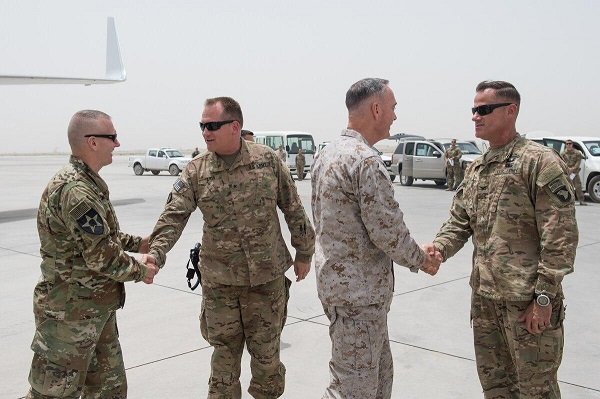 The documents, compiled from hundreds of interviews with national security leaders as part of an internal Pentagon review, detail statements by top leadership in the Pentagon and Afghanistan including Milley, as a three-star general lamenting the lack of clear strategy in the country and the moving goal posts for metrics of success.

“I’ve been to Afghanistan 10 times in the last four years in this job and I feel that we’ve never been lied to and we are continuing to move forward,” he said, adding that he served as the senior enlisted adviser to the International Security Assistance Force in 2011 and, “I firmly thought the strategy we had in place was working.”

“The men and women that have been going back to since 2002 to perform this mission have been pouring their heart and soul into its success,” he said.

And, he added, he never questioned his superior officers’ orders during the many capture-or-kill missions he completed in the country.