The Resolute Support (RS) Commander Gen. Scott Miller on Tuesday held a video conference with senior Afghan National and Defense Security Forces (ANDSF) in which he reaffirmed the Resolute Support’s commitment and support for Afghan security forces, and discussed Taliban violence levels and COVID-19 prevention, the mission said in a statement.

“I reiterate to you and everybody on this particular VTC, our commitment and support. And we know we’ll work through the political difficulties and we’ll be something that the Afghan people can be proud of as well as our own nations,” Miller said.

His meeting comes after the US announced that it will reduce its financial assistance to Afghanistan. 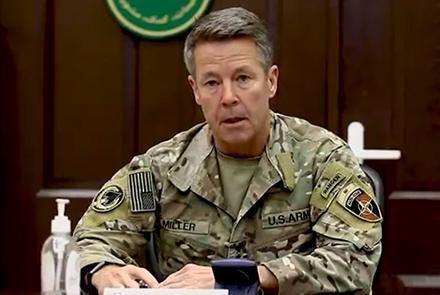 “That is evidenced daily by our military activities, but it’s also evidenced by our commitment from day to day as we work to accomplish all of our objectives,” he said.

He said that the Taliban will get a response if they escalate violence. According to security officials, the Taliban attacks have increased at least 10 provinces in the last five days.

“If the Taliban escalate violence and they have, they know they’ll get a response. For our part, the Taliban explicitly know and agree that we have the right to defend not only ourselves, but our Afghan security force partners. And so if they attack, there will be a response,” Miller said.

The Ministry of Public Health (MoPH) says based on the World Health Organization (WHO) warning, 80…