Due to recent floods and snow fall in 19 provinces of Afghanistan, 59 persons died and 143 more have been injured, informed Najib Aqa Fahim, state minister in natural disaster management during the meeting of disaster response center for assistance to flood affected people of Farah and Kandahar province.

He further added that 1,000 homes were completely destroyed and 2800 other homes were partially damaged. Mr. Fahim mentioned that most damages have been incurred in the provinces of Kandahar and Farah, and a large number of homes have been demolished and people were displaced who need urgent assistance. 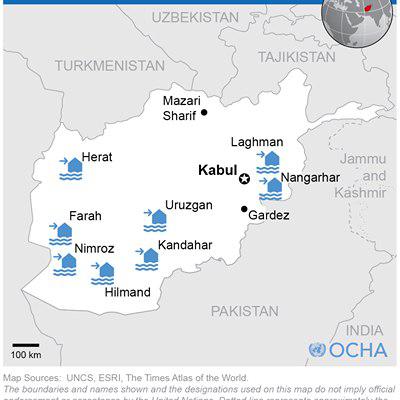 The health teams, provincial committees’ officials along with governors of Kandahar and Farah went to the area to help the people.

Dr Abdullah Abdullah, chief executive, while emphasizing about acceleration in transformation of aids and resource mobilization, said that the state ministry in natural disaster management and provincial committees, including government related institutions should mobilize all their resources and facilities to the affected people.

Meantime the officials of these institutions said that based on direction of chief executive, a delegation with 15 million cash went to Farah province to address the problems of the people. In addition to that, 500 families were given food, tents and blankets.

The state minister for natural disaster management said that 178 million was allocated for assistance in emergency situations by chief executive but the ministry of finance has not yet transferred money to the ministry’s budget.

The Chief Executive has also directed the Ministry of Finance to provide this amount to the state ministry in disaster management by the end of this week.