A court in Amsterdam sentenced an Afghan national, who stabbed two tourists from the United States in the Netherlands last year, to 26 years behind bars on conviction for two accounts of attempted murder with terrorist intent and three counts of threatening a police officer, the Dutch media reported on Monday.

In August last year, Jawed S., a 20-year-old Afghan male, stabbed two US tourists with a knife from behind at Amsterdam Central Station. One of the victims sustained a severe spinal cord injury and is now confined to a wheelchair, while the other one barely survived the attack and had to undergo an emergency surgery. After his arrest, the man promptly confessed to the attack. 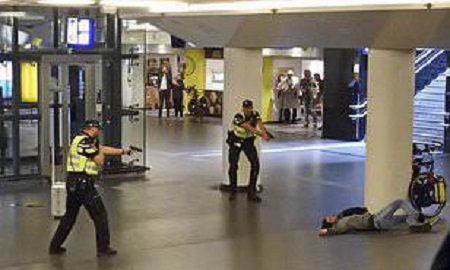 He would now have to serve a 26-year imprisonment sentence and pay over $2.2 million in damages to his victims, the NL Times reported.

According to the report, the attacker explained his motive by that he came to the Netherlands to “kill unfair and cruel people” and that his only mistake was that he did not stab people who were from the Netherlands.