Abdullah Abdullah, chairman of the High Council for National Reconciliation, met Iranian President Hassan Rouhani on Monday, who said that it was important for Afghans to achieve a real peace and preserve their successes after years of conflict.

Stating that “sustainable peace, stability, and security in Afghanistan as a neighbour and brother country is of special concern for the Islamic Republic of Iran,” Rouhani pointed to the friendly relations between Tehran-Kabul.

Highlighting Iran’s support, he said it was important for the people of Afghanistan to gain real peace to maintain their achievements after years of war and clashes, and the solution to this problem lies in political negotiations and the intra-Afghan talks. 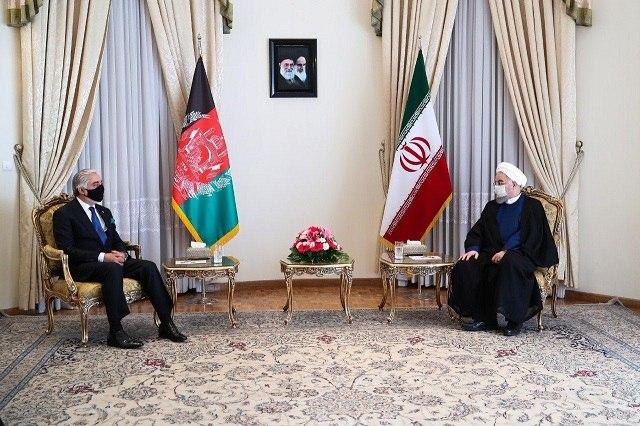 Rouhani stressed that the development of the Khaf-Herat railways, which will come on stream in the coming weeks, would strengthen economic and trade collaboration between the two countries.

The Iranian leader also said that they were ready to connect gas and oil product pipelines to Afghanistan.

“We have always stood along with the people of Afghanistan, and we will continue to support this country in all aspects,” he stressed.

Abdullah spoke about the recent developments in the peace efforts and stressed on Afghanistan’s will to achieve a permanent peace with dignity.

He thanked Iran’s “principled” stance and its efforts to establish lasting peace and security in Afghanistan.

Voicing support for the efforts to implement the economic plans, Abdullah said that doing so could provide the foundation for peace and further regional cooperation.

In an interview with Iranian media, he noted that Iran as an influential country has been and will be active in supporting the peace process. “The voice of the neighbouring country is very important to us in consultation at the regional and international level.”