President Ashraf Ghani on Wednesday met with the elders of Uzbeks and Turkmen in the Presidential Palace.

In this meeting, these elders spoke with the president concerning the insecurity in the northern and northeastern provinces, the consideration of the case of Nizamuddin Qaisari, the blockade of the roads in several districts, the problems of internally displaced persons and drought-affected areas, the prevention of extraction of mines in an unprofessional and illegal manner, job creation for the youth, and the construction of dams. 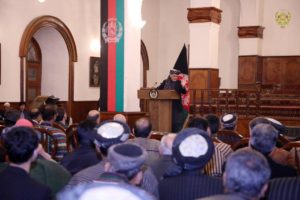 The president said that providing security to the northern and northeastern provinces of the country is one of the top priorities for the new management of defense and interior ministries.

No one is beyond the law and that the activities of irresponsible armed individuals and groups are by no means acceptable, the president reiterated.

On the case of commander Qaisari, he said that he has directed the NDS chief to investigate the case