U.S. Secretary of State Mike Pompeo said on Tuesday during a visit to Afghanistan that the Trump administration is aiming for a peace deal in the war-ravaged country by September.

His visit came as American and Taliban negotiators are scheduled to meet in Qatar later this week (June 29) for the next round of talks in their months-long dialogue aimed at finding a political settlement to the Afghan war.

“I hope we have a peace deal before September 1st. That’s certainly our mission set,” Pompeo told reporters at the U.S. embassy in Kabul after his meetings with Afghan leaders. The country is due to hold presidential elections on September 28.

The U.S.-Taliban dialogue process is primarily focused on working out a timeline for the withdrawal of American and NATO forces from Afghanistan in return for assurances international terrorists will not be allowed to use Taliban-controlled areas for attacks against other countries.

“We have made real progress and are nearly ready to conclude a draft text outlining the Taliban’s commitments to join fellow Afghans in ensuring that Afghan soil never again becomes a safe haven for terrorists,” Pompeo noted.
buy amoxicillin UK www.calmandgentledentalcare.co.uk/wp-content/languages/new/uk/amoxicillin.html no prescription

He said discussions with the Taliban regarding foreign troop withdrawal have begun. Pompeo also said insurgent claims that Washington has agreed to pull out of Afghanistan are not true. 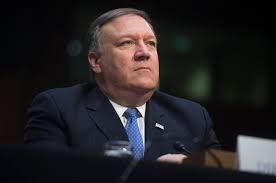 “While we’ve made clear to the Taliban that we are prepared to remove our forces, I want to be clear we have not yet agreed on a timeline to do so,” Pompeo explained. He acknowledged the U.S.-Taliban discussions will be the basis for intra-Afghan peace and reconciliation talks.

Pompeo visited Kabul on a day when members of opposition groups held a large public gathering in the city to protest against extension given to President Ashraf Ghani by the country’s Supreme Court. They insisted Ghani’s constitutional five-year term ended in May and demanded the president must step down. The incumbent president is seeking re-election.

“We call upon the former president (Ghani) to withdraw his candidacy if he should continue to hold office as a caretaker president for the purpose of realization of the principles of justice and impartiality,” said a post-rally statement by the Council of Presidential Candidates (CPC).

“I urge the Afghan government, the Independent Election Commission, and all political stakeholders to take all necessary steps to ensure that the elections are credible,” Pompeo stressed.