Kabul: At least 10 employees of a demining company, HALO Trust, were killed and 16 more were wounded after gunmen attacked their office in the northern province of Baghlan on Tuesday night, a security official spoke on the condition of anonymity said.

The incident happened in Baghlan-e-Marzaki district of the province. The bodies of the dead and the wounded were transferred to a public hospital in Pul-e-Khumri City, the center of Baghlan.

The Interior Affairs Ministry’s spokesperson Tariq Arian blamed the Taliban for the attack. The Taliban group has denied involvement in the incident.

Wilson has said that humanitarian workers and aid workers are protected by international humanitarian law. He described mine workers as one of the bravest people. According to the US Embassy Chargé d’Affaires, miners are making Afghanistan a safe place to live, grow their business, cultivate and enjoy life.

The presidential palace has blamed the attack on the Taliban. “The Taliban are targeting not only demining staff, but also mosques, schools, teachers and students, which is an act of hatred and a crime against humanity that has no rational justification,” President Ghani said. 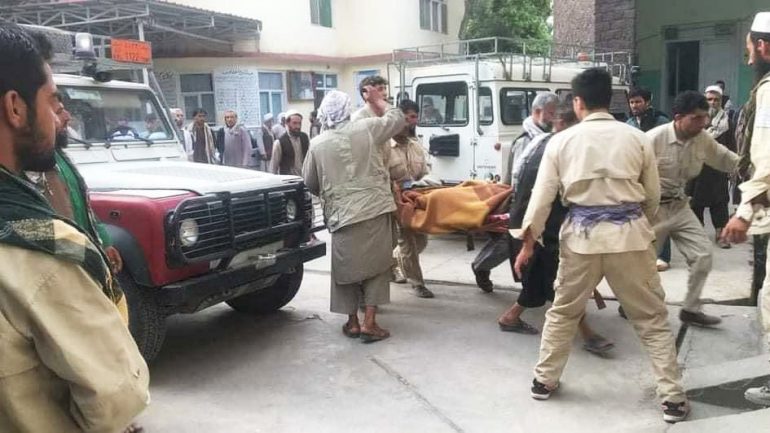 According to Mohammad Ashraf Ghani, the Taliban are targeting clearing mine workers because they are clearing highways, farms and villages of mines and explosives, and preventing civilian casualties from being increased by the armed opposition.

The chairman of the High Council for National Reconciliation also called the attack on the mine clearing staff “terrorist.” Abdullah Abdullah, chairman of the council, said, “These employees took the most serious risks and fought hard to clear the areas of the deadly danger of mines and other explosives. They had the most difficult responsibility, and by doing so, they were saving the lives of civilians. Targeting them is a great and unforgivable crime.”

Meanwhile, the Taliban claim that they have shot down a military chopper in the Jaghato district of Maidan Wardak province on Tuesday night when it was there to provide logistical support to the Afghan military.

Zabihullah Mujahid, a spokesperson of the Taliban has claimed the responsibility of shooting an ANA helicopter by the Taliban militants.

On the other hand, the Afghanistan Defense Ministry confirmed the crash of a helicopter in the Jaghato district of Maidan Wardak on Tuesday night, but claims the reason was a technical fault.

According to MoD, three people on board have been killed and one has been injured.