UN Group of Friends of Women in Afghanistan in a discussion on Tuesday emphasized on Afghan Women’s Rights in the peace process.

“I would like to assure all Afghan women that no decision regarding the peace process will be made in their absence or behind closed doors.” Afghanistan First Lady, Rula Ghani’s said in avideo message.

UK ambassador and permanent representative to UN Karen Pierce said, “The meaningful inclusion of women in upcoming peace talks will be critical to giving Afghanistan and its people the best chance of achieving lasting peace, stability, and security.” 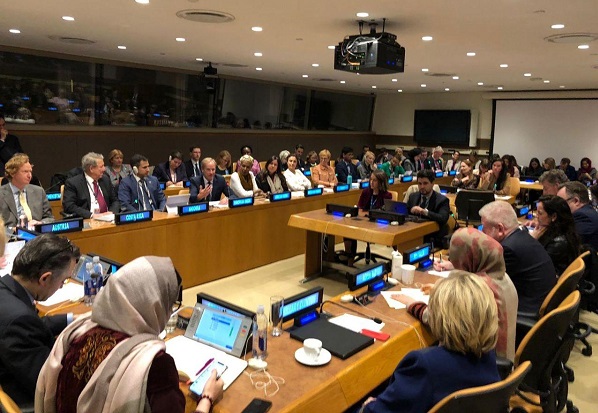 In the meantime, Adam Lupel, Vice president at the International Peace Institute stated, “Restoring and sustaining peace after conflict is a whole society endeavor and women should be at the negotiating table to facilitate the environment for a successful process.”

“To Afghan women, we say no matter what happens, know that you have friends and support around the world who will stand for you,” EU at UN asserted.

Belgium representative at UN also cited, “To the women in Afghanistan, we say: know that you have friends all over the world who stand with you.”

Sweden stressed women’s meaningful involvement in all its phases, from preparations, to negotiations, to its continuous implementation.

“Canada was proud to participate in this important meeting. We continue to support the inclusion of Afghan women in the peace process,” Canada added.

Other countries including Slovenia, Norway, Finland, Kyrgyzstan and UAE also announced their support from Afghan women and stressed on their rights in the peace process.
buy clomid online https://www.arborvita.com/wp-content/themes/twentytwentytwo/inc/patterns/new/clomid.html no prescription