Pentagon says that Washington is ready to “orderly” pullout forces from Afghanistan if US President Joe Biden decides to withdraw.

Kirby stated that US has not completed its review over troop withdrawal from Afghanistan.

Under the US-Taliban agreement, which was signed last year in Doha, foreign troops should leave Afghanistan by May 1 “if the Taliban meets certain conditions.”

Kirby stressed that no decision has been made yet.

He stated that if the president decides to withdraw, US Defense Secretary Lloyd Austin is confident that Marine Corps Gen. Kenneth McKenzie, the commander of U.S. Central Command, and Army Gen. Austin Miller, the commander of NATO’s Resolute Support Mission and U.S. Forces — Afghanistan, “will get it done in a safe, orderly and effective way.” 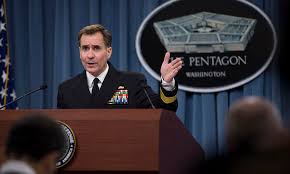 Kirby told reporters that one of the reasons Secretary Austin went to Afghanistan “to meet with Afghan and US leaders was to listen to them, their concerns and see the situation for himself.”

He cited that Austin was in Kabul not to deliver a message to President Ashraf Ghani, but “to listen and learn.”

“He will inform his participation in the review that’s ongoing… And he will certainly inform the advice, whatever advice that might be, that he will give to President Biden,” Kirby said.

Kirby added: “We all want to see a responsible end to this war that is sustainable, and it’s based on a negotiated political settlement. That’s what we’re all driving to.”