Women leaders spoke about the importance of being represented in the COVID-19 response and the cross-border diplomacy between Pakistan and Afghanistan.

Talking at a cross-border women’s dialogue on “Socio-Economic Impact of COVID-19 on Women in Pakistan and Afghanistan,” Mehnaz Akbar Aziz, a Pakistani Member of Parliament, said that appointing women as co-ambassadors or deputy ambassadors would give them a voice in all spheres of policymaking. She also recommended forming a Pak-Afghan working group on COVID-19 to present a gendered response to the crisis. 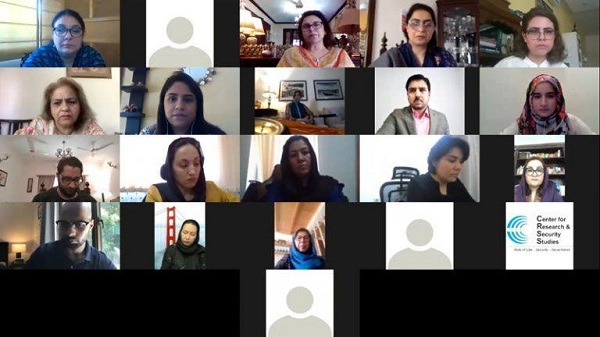 Senior Afghan politician and rights activist Shinkai Karokhail, stated that the COVID-19 crisis presents an opportunity to empower women as leaders and decision makers to build long term resilience and cohesion of communities.

Karokhail pointed that the pandemic has unequally affected women and girls more as they lost their access to education and economic opportunities. She said due to the economic effects of the lockdowns, families will prioritize boy’s education.

Muzammil Shinwari, head of the Organisation for Economic Studies and Peace (OESP) also spoke about getting technical assistance from their Pakistani counterparts regarding remote education since they had been successful in starting a virtual university for distant education and tele-schooling during the pandemic.

The dialogue, which was organised by Pakistan’s Centre for Research and Security Studies (CRSS), also saw a comprehensive discussion on the impact of the crisis on women.

Participants pointed that as the women were at home during the lockdowns, they had lost incomes and were at an increased risk of physical and psychological abuse.

Some of the recommendations were to devise a mechanism for Afghan women entrepreneurs to learn e-commerce and e-medical psychotherapy from their Pakistani counterparts.

They also formed a Pak-Afghan Bilateral Women Commission in which leaders from all sectors would address challenges through collaborative measures.

Furthermore, participants urged there should be women representation from the Taliban side as well in the intra-Afghan talks to include their voices.