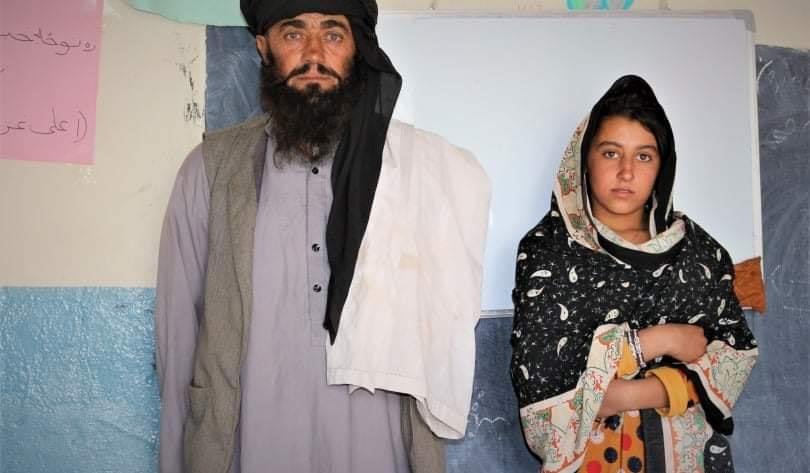 A Father and 3 Daughters: How Mia Khan’s Daily Routine Touches Hearts in Afghanistan

Social media pages have been filled with the photos and titles of an Afghan father with his daughter during the last week.

A father accompanies his three daughters to school every day and waits for them until their leave. This daily routine has caught attention of Facebook users and has been widely welcomed in Afghanistan.

Mia Khan is the father of three girls who study at the Nuraniya School, one of the Swedish committee’s schools in Paktika province.

One of the Afghan Facebook users in reaction to the photo “Rosie and Her Father” has commented, “This person can be described first as a heroic father and second a heroic and real man.”

The daughter of Mia Khan, Rosie and her two sisters come to Nuraniya’s school every day on their father’s motorcycle to study. They want to become doctors in the future.

Mia Khan is a middle-aged man who is illiterate, but is trying his best to make a different for his daughters’ future.

HIs daughters, each now in grades five, six and seven, want to become doctors because their father wishes her daughters to be educated in this field.

“I bring my daughters to school every day to study and experience a different life than her mother and I. Now I suffer why I’m not literate and why there’s no doctor in Paktika so I’ll do whatever I can to educate my daughters,” Mia Khan told Reporterly.

Like most Afghans, Mia Khan grew up in a traditional family, with a difference that his daughters’ lives were valuable to him, and he said he should nurture her daughters like men to be independent and self-sufficient.

He has two sons, but both are illiterate and are now working with a limited income.

Mikhan lives in the Sharan city of Paktika province; a place where people still believe that girls should not go to school, but Mia Khan said, “”It’s true that people around me are unhappy about taking my daughters to school and sometimes express their opposition, but I don’t care what they say because I know it’s the right of my daughters to study.”

Mia Khan considers the role of women in society important and to give women and girls as much value as men, because women can make a big difference in a society. Mia Khan, meanwhile, is in charge of a family of 12, of which seven are female.

Saif Rahman Shahab, Communications Officer of the Swedish Committee in Paktika, told Reporterly, “It has been three months since I have known Mia Khan, a man sitting in a corner of the school every morning. I didn’t catch up with him in the first days I went to school, but a few days later a question raised to my mind that what he was doing at the school every day.”

Shahab asked a school official that who he is and the response he received was a smile on his face.

The response was that Mia Khan is the father of three girls who study at this school. Every day, he passes more than 12 kilometers to take his daughters on a motorcycle to Nuraniya school and then take them back home.

This was a surprise to Mr. Shahab and made him to write about Mia Khan and how encouraging is his life story.

The Swedish Committee has a school for girls’ education in each Afghan provinces, which is also followed in Paktika.

Earlier, the Nuraniya School used to teach up to the grade 6, but now it has added a secondary education to its teaching.

Students at this school now reach to 220 people. Mia Khan’s daughters, ages 8, 10, and 12, are enrolled in the Swedish committee schools.

The Easy and hard life in Afghanistan

Miakhan calls life in Afghanistan, and especially in Paktika, difficult and easy for people to live in based on their situation. He believes that if one has a good income, he will have an easier life, but if one has lesser money, his life is difficult.

Paktika is one of the eastern provinces of the country suffering from insecurity and cultural constraints, but a family and a father like Mia Khan can be hope for a better future in these areas.