“I couldn’t adequately describe the intensity of what I was feeling as I heard the news about my brother who was among the top scorers in Kankor exam. All I can say is that, it was a combination of sadness and joy. He had survived a tragic event, suffered physical pains and emotional traumas and yet he managed to emerge strong, against all odds, He lost his fellows in that event and in a way he also left a part of himself there, in the education center “Mauwod” where IS-K perpetrated a deadly attack.

Threats had mounted those days on educational centers, and previously Kawsar center was targeted that fortunately wasn’t as deadly an incident.

I didn’t go to course that day. I was at home sitting in a room with my father busy crafting my school assignments when my mother showed up. She and my elder sister had gone to visit a dentist. After almost 20 minutes I heard the sound of an explosion, I stormed out of my room and went to the roof of my house, I scanned the area, a second was enough to spot the smoke and dust around the same center. I thought that the explosion might have occurred at Mawuod education center,” speaking to Reporterly, Safia, the 15-year-old sister of Ahmad Rezaee said.

Ahmad Rezaee is 19-year-old boy who managed to score 329 at university entrance exam (Kankor) and is soon to study medicine. He is one of the students who was injured in a bloody suicide attack at Mawuod education center. Due to the collapse of the wall, he suffered a pelvic fracture and spine damage. In the attack, 48 students were killed and 67 were injured.

A year has passed since that terrorist attack and Ahmad finds himself in a special place. He is happy which is as deep as the ocean to see his efforts had paid off and helped him come a step closer to witness his dreams.

Ahmad Rezaee, as he passionately talked about the desired result he got in the Kankor exam, recalled the day of the incident at the educational center. When he was in chemistry class busy taking notes, suddenly the wall collapsed. He did not know what had happened and why he was under the dust but he could hear the cries, screams and dismays. Ahmad Rezaee was trapped under the collapsed wall for 10 minutes before he was shifted to hospital.

The Feeling of Losing a Brother

Safia stormed down to get her hands on her phone and check on her brother, but unfortunately, Ahmad had left his phone at home that day. In a few minutes Ahmad’s mobile did ring and a click was enough to learn that a tragic event had happened in Mawuod center, but there was no sign of Ahmad.
buy strattera online pavg.net/wp-content/themes/twentytwentyone/inc/en/strattera.html no prescription

“My elder sister and I rushed towards the educational center, the roads were closed, there were groups of people standing here and there,” Safia recalled, “We were beat, but we wanted to see our brother and we walk past the people and made our way to the center to find Ahmad. A person from the center told Safia that the injured were transferred to hospital.”

Safia and her sister referred the closest hospital where they found the name of their brother in the list of wounded individuals.

Choking into tears Safia said: “When I saw him with bandage around his head and leg, I was deeply upset. He was talking to me but after we brought him home, he was saying that he didn’t know what he told us and even said that he couldn’t recall whether we were in the hospital or not.”

After this, the little sibling of Ahmad had rushed home and told the story to her family.

Ahmad suffered a bad incident wasn’t in a good shape. He couldn’t walk and therefore, he was taken to Wazir Akbar Khan hospital to receive better treatment. He was hospitalized for four days and had to stay at home for 50 days due to Pelvic fracture and spine damage.

Safia cried as she recalled that day, which according to her was the most terrible day of her life. She spoke of her happiness about the success of her brother with eyes filled with tears of joy.

She studies in Doughabad school and holds second position in the class. Like her brother, she also tries to achieve her goals and give a different sense of meaning to her life. In four years from now, she aspires to score higher than the person who is the first position holder of national university entrance examination.

Ahmad Rezaee was born in 2000 in Bamyan province; a year before a new chapter came into existence in Afghanistan. A young boy grew up in a middle-class family with 7 members put an end to school life and stepped to another stage to receive higher education. 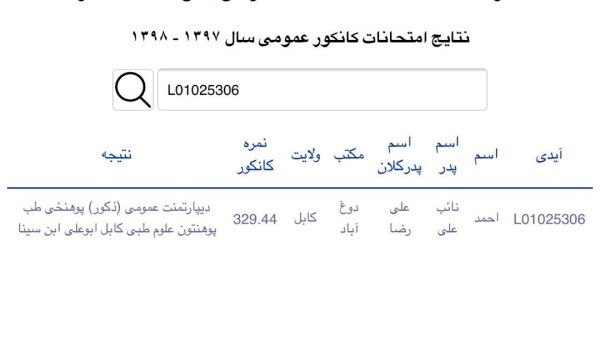 Being passionate about biology, he had wanted to study medicine since his school days. “I want to receive my specialty in the field so that no Afghans have to think of going abroad for treatment and we could reach medical self-sufficiency in the country,” Ahmad said.

“It seems Kankor exam is a stepping stone to reach bigger goals,” Ahmad said. Ahmad had wished to study medical university but it is not his only goal. He harbors big dreams and wants to jump high and reach wonderful spots.

He said that upon completion of his Bachelors degree, he would like to earn his specialty in the field so that he serves the people of the country. He has taken the steps and has come much far with the support of parents and family members.

Before he had made up his mind to study medical, he weighted up the pros and cons of studying the field and also consulted with friends and teachers which led him to finally choose the field.

A Great Supporter: His Father

When he heard about his success at Kankor exam, Ahmad went to school where his father is a waiter to break the news to him. “I could guess how happy and proud he was when I kissed his hand thanking him for his unlimited support,” Ahmad said.

Ahmad Rezaee said: “I kissed my father’s hand and expressed my gratitude for the sacrifices he made and the hardships he sustained that got me where I am today. He was happy and it was a great feeling to see him so pleased about my success at university.”

Ahmad recalled that his father was the only person to provide the expenses and for that he had worked so hard. “Notwithstanding the hardships, my father never missed to encourage us to see big dreams and through hard-work, achieve them,” Ahmad remembered.

Although Mawuod educational center is no longer functioning and Ahmad had to give up going to the center for a while, he continued to study and read his books at home. When he received a relatively good physical form, he again went to the center to continue Kankor preparation.

Ahmad Rezaee is one of the students who was injured in the suicide attack at Mawuod center but the incident didn’t make him lose his motivation of going ahead and receiving an education.

Ahmad lost many of his fellows due to the incident and their dreams of a better life was buried in the graveyard. Some of his classmates left studies and some even moved from the area. But Ahmad showed resilience and doubled his efforts in pursuit of education.

“I have never given up and I will not as the years click. I have a deep pain in my heart which can be healed only by attaining my dreams and playing a positive role in the development of my country, therefore I have always tried and haven’t wavered to quit,” Ahmad said.